Stanley Douglas was born circa 1940.  He is a highly respected senior man of Amata Community.  A dynamic man with a strong work ethic, Stanley has worn many hats, including many years as a cattle stockman across South Australia and Queensland before working for 15 years as one of the first Anangu policemen in Central Australia, and later a community pastor.  Stanley is now dedicated to developing his painting practise at Tjala Arts, and is being recognised with tremendous success.  He was named as a FINALIST for the 2021 National Aboriginal and Torres Strait Islander Art Awards.

Stanley depicts one of the most famous stories- that of the Seven Sisters. This creation story is about the constellations of Pleiades and Orion. The sisters are Pleiades and the other star, Orion, is said to be ’Nyiru’, described as a bad or lusty man. Nyiru is forever chasing the sisters as it is said he wants to marry the eldest sister. Nyiru is trying to catch them by using magic. He turns himself into the most tempting bush tomatoes for the sisters to eat, and transforms into the most beautiful fig tree for the sisters to camp under. However, the sisters are too clever for Nyiru. They outwit him as they are knowledgeable about his magic. Eventually the sisters escape into the sky forming the constellation Pleiades. Nyiru can also be seen in the sky as Orion, hovering nearby as he continues to pursue the sisters. 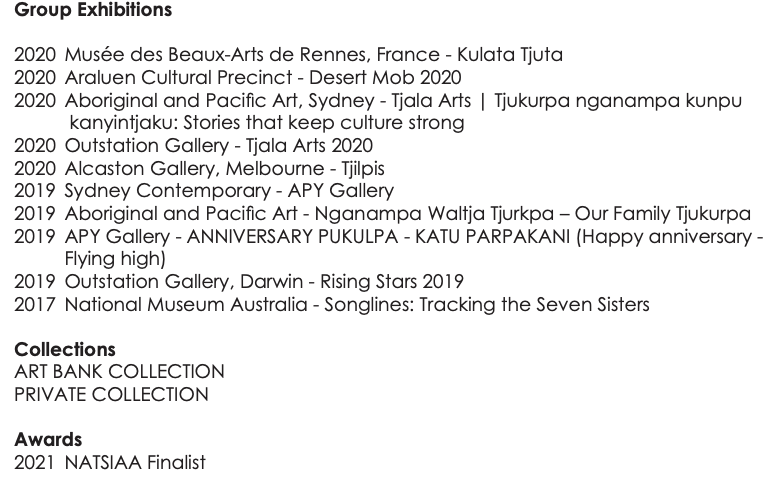